A report published today by the UN Development Programme (UNDP) with Professor Stephen Fisher and his academic research team (Martha Kirby, Dan Snow and Dr Zack Grant) reveals that that two in three adults across G20 countries believe climate change is a global emergency. Their children are even more alarmed.

The huge poll, called the G20 Peoples’ Climate Vote, featured a sample of almost 700,000 people, covering 18 of the G20 members, including over 300,000 people under the age of 18. In many G20 countries, under-18s will be of voting age in just a few years, meaning the survey has significant value as a predictor of where public opinion is headed on climate policy.

The results showed for the first time the difference between children and adults’ levels of belief in climate change as a global emergency, with 70% of under-18s in the G20 countries surveyed subscribing to this view, against 65% of adults. The countries where under-18s were most supportive of this view, relative to adults, were Australia (with a margin of eleven percentage points), the United States (ten points), and India (nine points).

The report presents the levels of public support for 14 climate policies, among adults and under-18s, across three main areas: finance, reducing greenhouse gas emissions, and adapting to extreme weather events.

Professor Fisher, lead academic researcher for the project said: “Our findings show that younger people within the G20 demand more immediate and interventionist types of environmental policies from governments. As this generation comes of voting age, political leaders should not ignore the bolder expectations of this emerging electorate when it comes to their policymaking.”

On climate finance, the survey showed that both adults and under-18s strongly support a transition to a green economy. However, adults were more in favour of using interventions such as making companies pay for their pollution.

On reducing emissions, the report found divergence between under-18s who tended to support bold climate policies like promoting renewable energy, electric cars, and cutting polluting fuels. In the US, for example, young support for electric vehicles and bicycles, was 13 percentage points higher than it was among adults. This highlights a potential future shift in demand for these policies, as these citizens come of age.

But there were sometimes big gaps in the other direction. For instance, in Germany, adults were more likely to support reducing energy waste and using more clean energy in the transport of goods, with adult support respectively 15 and 14 percentage points higher than among under 18s.

Policies to help communities adapt to the impacts of climate change, such as extreme weather events, also saw differing levels of support among under-18s compared with adults. Under-18s were generally more supportive of early warning systems for disasters, by a margin of eight percentage points in France for example. Also climate-friendly farming was more popular among young people.

Perhaps most striking was the extent to which young people were more supportive of providing good and affordable insurance, which is important for helping families, businesses and communities rebuild after extreme weather events. Overall support for insurance provision was five-points higher for young people than adults across the 18 countries surveyed.

UNDP Administrator Achim Steiner and former head of the Oxford Martin School said: "The trajectory is clear: already a clear majority of citizens across the G20 believe we’re in a global emergency. Support for bold climate action is already widespread, and this data shows it will only strengthen in the years ahead, as young people exercise their voices and their votes to reward bold climate action. G20 leaders are responsible for some of the biggest, most historic decisions imaginable. They must listen to the demands of their people, and of future generations who will inherit the consequences of actions – or inactions – of G20 leaders in Rome and in Glasgow in the days ahead.”

Without bold action from G20 countries, which account for 80% of the global economy and 75% of global emissions, it will be impossible to keep global heating to 1.5C, as required by the 2015 Paris Agreement.

Find out more from the UNDP. 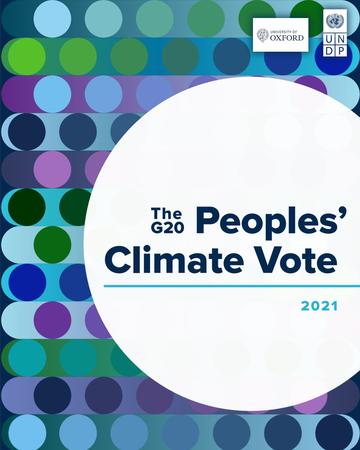