Published by Oxford University Press as part of the Proceedings of the British Academy series, ‘Disappearances in the Post-Transition Era in Latin America’ is a new volume edited by Leigh Payne, Professor of Sociology at the University of Oxford, with Karina Ansolabehere, National Autonomous University of Mexico, and Barbara A. Frey, University of Minnesota.

The volume seeks to understand post-transition disappearances in Latin America by examining four different countries and the dynamics that play out there. It considers a variety of voices and points of view: those expressing the experiences from the perspectives of victims and relatives; those of activists, advocates, and public officials seeking truth and justice; and those from scholars attempting to draw out the specificities in each case and the patterns across cases. The project aims to gain knowledge and to draw on deep commitment to change within the region to overcome these tragedies.

Divided into three parts, the volume includes a theoretical framework, country case studies, and tools which set out best practices used by civil society groups and non-governmental organisations to address the rights of victims.

Leigh Payne is professor in Sociology and at the Latin American Centre at the University of Oxford. Her research focuses on transitional justice, human rights and social movements and she is the author of a number of books and articles. Recent work includes the co-authored book Transitional Justice and Corporate Accountability from Below (Cambridge University Press, 2020) which tracks and analyses transitional justice mechanisms for holding economic actors accountable for human rights violations in dictatorships and armed conflict.

'Disappearances in the Post-Transition Era in Latin America' is out now. Find out more at Oxford University Press. 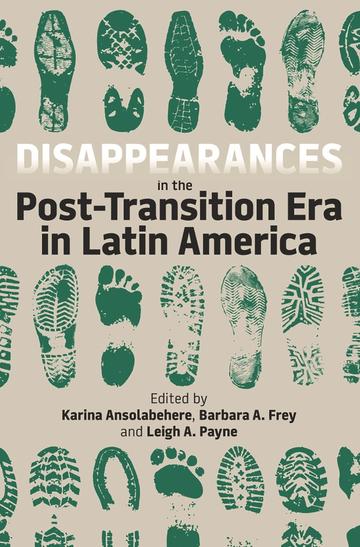