With the help of a major grant, a UK-Japanese collaboration will investigate the potential of artificial intelligence to assist (or replace) humans in unpaid domestic tasks – and what the social consequences might be.

Oxford Research Fellow Dr Ekaterina Hertog is the recipient of a £500,000 grant for a collaborative project with Professor Nobuko Nagase of Ochanomizu University. The grant, awarded jointly by UK Research and Innovation and the Japanese Science and Technology Agency, is part of a wider effort to understand the impact of AI on people’s lives.

The pair’s project, ‘DomesticAI: The Future of Unpaid Work’, seeks to understand AI's potential to transform unpaid domestic work in both the UK and Japan.

“Unpaid work occupies substantial amounts of time across genders and age groups, but so far the future of unpaid work has attracted little research attention,” Dr Hertog explains. “Our goal is to make realistic predictions as to whether, and how, smart technology will replace or facilitate human work in multiple domestic tasks.”

Dr Hertog and Prof Nagase will lead research teams in the UK and in Japan, respectively. The teams will build on approaches developed to predict the future of various occupations in the paid labour market and apply them to unpaid domestic work. Combining these with an analysis of economic and social factors, including affordability of technology and social acceptability of machines in a domestic environment, they aim to understand how this area of our lives is going to change.

“I expect AI to have a greater impact on some spheres of domestic life, like alleviating routine domestic labour, and less in other spheres – particularly care work that involves social interactions,” Dr Hertog predicts.

A member of the Department’s GenTime team, Dr Hertog takes a particular interest in the way domestic labour is divided up according to gender. The worldwide nature of this issue makes the cross-border collaboration particularly promising. “I found it striking that division of labour when it comes to domestic work remains unequal everywhere in the world,” she says. “Women do substantively more domestic work than men, even as they are catching up in terms of educational attainment and labour market participation.

“There are of course significant differences between societies in the extent of this inequality. This makes our two-country comparative approach particularly informative, as it will enable us to analyse how automation of domestic work progresses in a highly gender unequal context (Japan) and compare it with the more equal participation in housework and childcare observed in the UK.

The increasingly widespread adoption of AI across our lives has the potential to make huge changes when it comes to this inequality. Again, it is different across the world: “In Japan, full automation with robots is at the forefront of the media attention - whereas in the UK, the focus is on platform-based automation which facilitates moving unpaid domestic work to the paid labour market.

“Using these two countries as case studies will provide us with a better understanding of how companies and individuals choose and evaluate these two approaches, whether cultural context plays a role in our globalised world, and whether the initially observed difference is real – or whether it only appears to be so at first glance.”

As such, AI has massive potential. Its impact on gender imbalances can’t be denied, and Dr Hertog is excited by the possibilities: “Our analysis will bring invisible domestic labour that today is largely performed by women into the ‘Future of Work’ debate. It will enrich our understanding of how time, the scarcest resource we have, will be influenced by AI-powered technologies at home.”

Finally, Dr Hertog believes that her team’s findings will also highlight the potential and emerging vulnerabilities that could come with handing over domestic tasks to AI.

Read more about the project 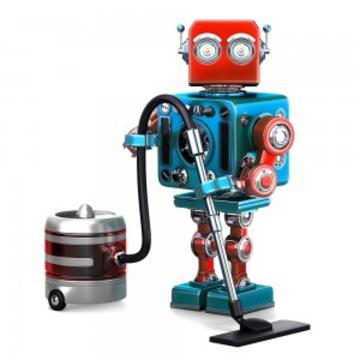